Another belated post, although this delay was partially out of my control.  I was a tester for the Acton dress, a very cool pattern released by In the Folds late last year.  I actually tested it last April, but Emily decided to overhaul the instructions, so I had to keep it hush hush for a long time.

Keeping my mouth shut was made difficult due to the fact that I really love this dress, and wore it out a couple times (around non-sewing people, of course) before the release date.  It even made it to the White House!  Don’t worry, though, this photo was taken while Obama was still in office, well before the election.  That’s why I’m smiling the smile of someone oblivious to the current state of affairs.

As you can see from the line drawings, the Acton is a sleeveless dress with two back variations (high or low) and two skirt variations (A-line or wrap).  I was asked to test View B, which is honestly what I would have picked anyway.

I knew before I started (and from Emily’s suggestions) that I’d have to make a muslin to test the bodice fit, and sure enough the size D was a bit tight across the bust.  My boobs were squished, and at first I though that maybe it wasn’t so bad and I could deal with it.  But for some reason, I decided to see if I could make it better.  So I did my very first FBA on a princess seam bodice, and it was magical.

For my initial changes, I lowered the bust apex by 1/2″ and then did a 5/8″ FBA, following the instructions in Fit for Real People.  I made up a muslin of these adjustments, and the fit was pretty good!  No more squished boobs!  The only problem was some excess fabric right under the bust, which was easily pinched out (and trimmed out of the pattern piece).

One piece of advice I will offer to anyone doing an FBA on this dress: make sure you get the neckline in the right place and figure out strap length before you make changes.  The neckline is supposed to be pretty high, and the placement will affect where you make your FBA and how much of an adjustment you will need.  Also, you may want to fit it while wearing the bra you’ll most likely wear with the dress (or go bra-less, if it works for you).  For me, that meant wearing my strapless bra.

I also wasn’t totally sure how the skirt was constructed, so I decided to grade it out to a size F at the hips.  Later I realized this was unnecessary because the skirt is really wide anyway due to the wrap.  It’s all good, though, since it didn’t seem to affect the fit.

The other change I made was to add an underlining to the skirt, because my fabric was a little sheer.  Again, I took the safe route because I wasn’t sure how to line with those wrap pieces.  I think if I were to make view B again (in a sheer fabric), I’d use the skirt of view A as a lining pattern, and simply attach it at the waist.  That way it won’t add any bulk to the wrap.

Guys, I’m not normally one to dress for my “coloring.”  I tend to just go for whatever colors and prints make me happy, although I’m pretty sure I’m an autumn.  (I think.  When I was working on a self portrait in art class in the 7th grade, I couldn’t get my skin tone just right.  My teacher came over to help and started adding yellow to my brown and pink paint until it was perfect.)  But man, I’m really digging this deep purple on me.  Even though it was really gloomy the day we took these photos, I don’t feel like I look washed out.

I also never thought I was a paisley type of person.  So when my aunt gave me about 9 yards of this fabric (it feels like a lightweight polyester crepe . . . georgette?  It’s heavier than a chiffon.), I wasn’t sure if I’d use it.  But it just so happened to be wide enough to fit my Acton skirt pieces on the straight grain.  Match made in heaven.  And guess what?  It turns out I’m a paisley type of person.

The underlining for the skirt is a mystery lightweight knit.  Well, a mystery until I tried to iron it on the polyester setting and burned a hole through the center front.  Then I figured it was probably nylon.  I didn’t have enough fabric to cut another piece (and it was already attached to the outer fabric), so I covered up the hole with a large paisley appliqué.  I kind of like it!  It adds character, as they say.

Let me guess, you’re thinking to yourself right now “Why in the world did she use a knit underlining for a woven dress?” I have no idea why I thought that was a good idea.  I even wrote in my sewing journal after I finished the dress: BAD IDEA.  It stretched and pulled like crazy while sewing, but I hand basted it and I don’t think it looks bad now.  Just a pain to sew.

My hem ended up dropping a lot, and I kept messing up while trying to straighten it, so I had to trim off about 2-4″ all around.  To save some of the length, I opted for a rolled hem on my serger.  Luckily I had a spool of matching thread!

What do you think of the chain and tassel on the zipper?  I often use the necklace method to pull hard to reach zippers solo, but this time I really liked how the gold chain looked with the dress.  To jazz it up a little, I made a matching tassel out of embroidery floss.

Making this post and has me thinking about revisiting this pattern and doing some variations.  I kind of want to take the bodice of the Acton and add some wide leg pants to make a jumpsuit.  Or maybe make it out of a denim and wear it like a pinafore?  Can I be that cutesy? 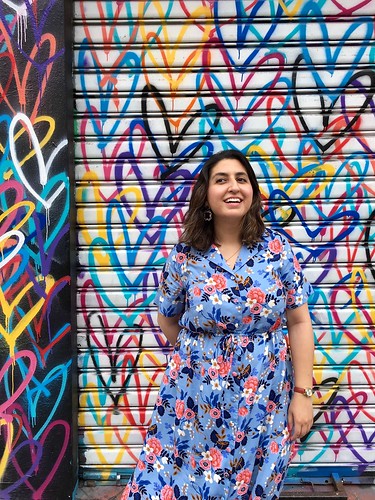 Hello! I'm Henna, a science teacher and the blogger behind Stitch Study. I bought a sewing machine in 2010 and haven't looked back since. Join me as I sew my very own handmade wardrobe!